-How much productive work was actually accomplished by workers whose employers made them come in for a few hours today? How much of that work could have been accomplished had they worked from home instead? Would they, in fact, have accomplished more in a full day at home?

-How much productive learning was accomplished by students who were in school today? Less than they might have accomplished on a full make-up day later in the year, perhaps? Has anyone considered the psychological impact, especially on those students who (as of this writing) remain stuck in their schools due to bus issues, parents-cannot-reach-them issues, or the-school-refuses-to-allow-them-to-drive-home issues?

-Has anyone died in this mess? (As of this writing, I have not yet seen fatalities reported.)

-Was all of the above worth the risk of going forward with business as usual, assuming the downside risk was a clear day wasted?

When the population of metro Atlanta went to bed last night, we knew bad weather was on the way. The National Weather Service issued a winter weather warning advising us that, starting perhaps as early as 9 a.m., we would be in for several hours of accumulating snow.

By this morning, the warning was still in effect, with weather forecasters saying, bascially, “brace for impact” to not only the Atlanta area, but most of Georgia and its neighbors.

Metro Atlanta has a bad reputation when it comes to dealing with winter storms. We don’t get them often, so we don’t have the equipment, the people, or the mentality for handling even a couple of inches of snow or ice.

Yet, knowing this, with a few exceptions, metro Atlanta schools, businesses, and government agencies decided to act like today was a spring day.

They waited until the snow started falling — a little later than predicted, around 11 a.m. — pondered a bit, and then, a few at a time, started realizing they needed to release their students and workers.

So, this afternoon, instead of sitting safely at home watching the snow fall, most of the metro population is on the roads, struggling to leave work, pick up children, and fight their way home in treacherous conditions.

Most of these drivers typically face an hour-plus commute (in ideal conditions), and today, in these conditions, there are crashes, there are injuries, and there are lines of traffic that will endure for hours — a situation that could have been mostly avoided if we had leaders willing to think ahead and work with the facts at hand. 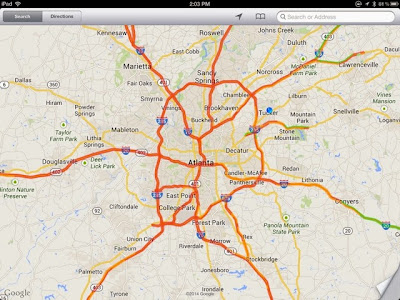 I live in a city, but I am from a small town.
Recently I chatted with a friend about driving from the one to the other, and the discussion turned to traffic, which led us to compare the major obstacles encountered in the respective locales.
Here: Too damned many people trying to go the same place at the same time on the same road.
There: Occasionally meandering livestock.
Which reminded me of a story:
On a hot July day back in 2000, when I was at my first newspaper gig in my small South Georgia hometown, I was sent to take pictures of cows blocking one of the major downtown streets.
Only, the cows weren’t really blocking the street.
They were in a livestock trailer, and the truck hauling it broke down.
So, technically, the truck was blocking the street, and the cows were just along for the ride.
Anyway, it was taking a long time for the appropriate wrecker (the type that can tow a semi) to arrive.
And the cows were overheating.
So, the fire department came out.
And hosed down the cows.

I enjoy living in a city more than I enjoyed living in a small town, but I will always love small towns for exactly this sort of thing.