Sick. It’s a lousy way to start the year.

Well, except for the part where The Empress of Whisky keeps bringing me whisky-laced coffee.

I should probably eat something, though.

Plenty of choices. Two days ago I made a large batch of dressing (using my mom’s recipe). I intended to take half to a New Year’s Eve party, but, well, sickness.

Instead we stayed home and The Empress beat me at board games. At midnight we toasted each other and our kitty.

For New Year’s Day, I made black-eyed peas, not because I am superstitious, but because they are delicious. Also: turkey breast, the aforementioned dressing, potatoes, several vegetables for The Empress … quite a holiday feast, most of which happily doubles as good comfort leftovers for sick people.

I’d like to tell you I’ve been sittting here, planning my year, looking ahead … but mostly I’m just fighting the kitty’s advice to nap again.

All together, it’s a good enough day. A quiet place to start what promises to be a noisy year.

Today’s tasting notes: Do not fear to drink this. Perhaps maybe try this if you’ve never had Scotch whisky before. It is the definition of approachable — an easy-to-enjoy whisky exemplifying the basics of a style, in this case a single malt from the Scottish Highlands.* Smell it, and it will take you to a warm happy place. Sip it, and feel that warmth flow into you. Hold it in your mouth briefly, savor the heat and subtle sweetness. Swallow, and feel smoothness with just enough of an edge to let you know it is actually Scotch whisky.

Today’s thoughts: Growing up I was a picky eater. That is a true statement, but it also rather understates both the past and present. When I was a kid, I hated eating almost everything. Ever heard a parent lament that their kid will only eat chicken nuggets and ketchup? Yeah, I hated those, too. Especially the ketchup. Bleh. And I still hate it. I hate nearly all condiments, in fact. And yes, hate is the right word. It’s not a word I ever really go for, but I will allow myself to be an absolutist and use that word in regard to those things. Ketchup? Hate. Mustard? Hate. Mayonnaise? Hatehatehate!

Send me food with any of that on it and tell me to just scrape it off? Fuck you. Scrape your face off.

My younger sister told me at Thanksgiving that her two-year-old son can’t stand mayonnaise, and she thinks he might be allergic because he throws up when he encounters it. When she said that, I wanted to run to him and hug him and tell him, “You are not alone! Uncle Jon also knows this pain!”

I will as soon as he gets a handle on this language thing, though.

How I loathed those phrases, which were thrown at me so often in my youth.

And yet … I now grudgingly admit they hold glimmers of truth.

I mean, I did finally learn to like pizza, a burger in a bun rather than separate, potatoes, pecan pie …

Contrary to appearances, I was never against trying things. I just wanted people to listen after I tried a thing and said, “No, this isn’t for me.” Usually, the gag reflex got the point across, but people are surprisingly persistent when you tell them you can’t stand a thing they love.

Here is where I nominate my mother for sainthood, because wow did I ever make her life difficult, what with the not eating most of what she ever put in front of me, which necessitated an awful lot of cooking something extra just for me, and so much special ordering at restaurants, and entirely too many patient conversations explaining my eating habits to other people, and … god, how is she not completely mad?

She is made of steel, that is why.

But under her steel beats the softest heart in the world, and she never let me go hungry or forced me to be miserable just because I was picky.

I am going to go call her as soon as I post this.

Today’s note on meeting the expectations of others: Fuck ’em. Yeah, me included, for telling you to try Scotch whisky. Don’t want to? Don’t. Grinning and bearing is overrated. Graciously decline where possible, threaten to stab as needed, repeat as necessary. And always, always, to thine own taste buds be true.

Today’s toast: To picky eaters everywhere: May the person who takes your order always listen carefully and get it right!

* — Speyside. I know. But if you know enough about Scotch whisky to know Glenlivet’s sub-region, then that paragraph really isn’t for you, now is it? 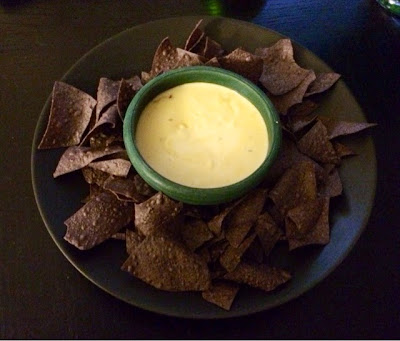 The chips are Xochitl blue corn chips — organic, no preservatives, no cholesterol, no trans fats, no GMO.
Not bad.

I picked up a bag on a recommendation that they are among the highest rated corn chips, but, honestly, for the price — about twice typical corn chips — they don’t impress.

They are very thin, however, which means a one-pound bag contains a lot of chips, and, when you’re dipping them in cheese, the chip-to-cheese ratio nicely favors the cheese.
Mmm … cheese.

Speaking of, I used a Serious Eats cheese sauce recipe that’s pretty good. (Tip: If you’re careful, you can make that work in the microwave.)

Having said that … I’ll take any excuse for eating pie.

I think I finally mastered chopsticks: 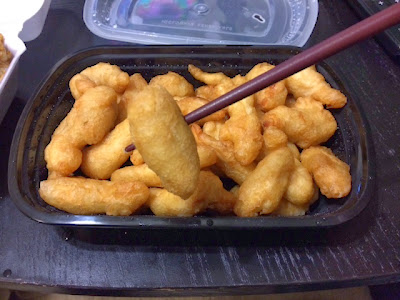