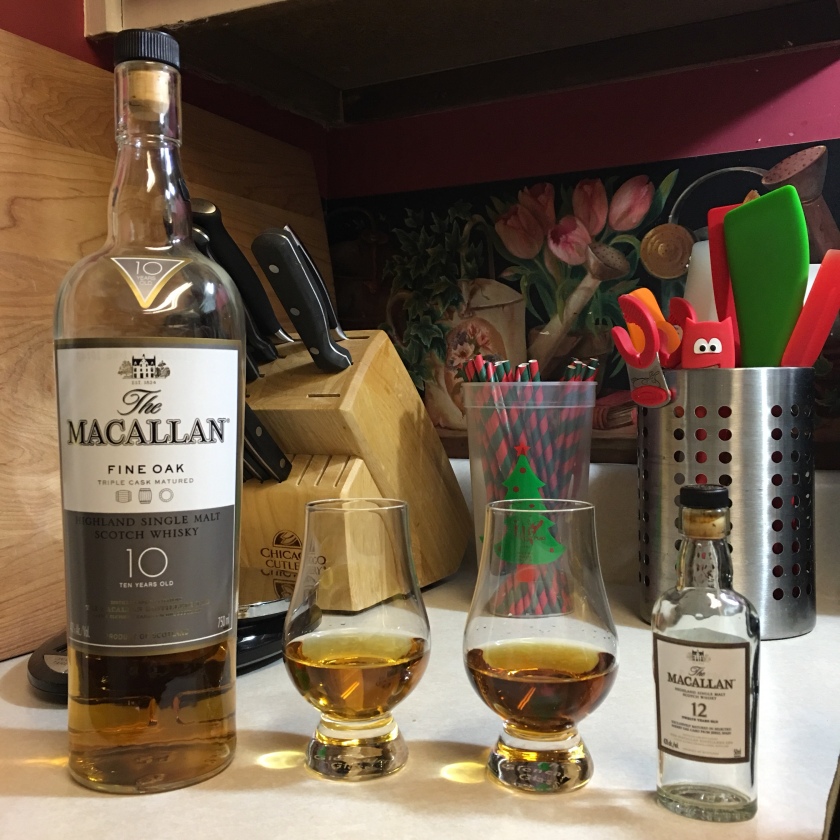 Today’s tasting notes: As you can see from the photo, I only have a little of this 12-year-old available to me. (I love little bottles. But then I love sampling, so of course I do.)

I had not tried the 12-year-old elsewhere prior to opening that little bottle tonight, but I have tried a fair amount (as you can tell from the bottle level) of the 10-year-old expression from the same distillery. I won’t repeat myself too much, since I wrote about that one last year, but I did want to have it again tonight just for the joy of doing a side-by-side tasting.

A year later, I still think the 10-year-old is a fine “workday whisky.” It’s mild, but also warm, in the inoffensive way common to Highland whiskies. I would never be upset to be served this. (Having said that, I have not touched my bottle of this one in a year, given my predilection for bolder whisky.)

The 12-year-old is also delightfully easy to drink. In isolation it’s not a huge departure from its younger sibling, but tasted side-by-side there are richer, sweeter flavors that come across pretty clearly. There’s also a deeper aroma. If the 10 is mostly honey, the 12 is that honey with a dollop of maple syrup. And as you can sort of tell by the photo, the 12 is also just a shade darker. (That’s probably the result of its longer time in the barrel. I have to say “probably” because there are a lot of factors that can affect color — char level on the barrel and age/reuse of the barrel are big ones — and there exists the possibility a distiller might have artificially altered the color, which, long story short, may or may not be legal to do depending on the whisky and country of origin.)

You might be tempted to attribute all of the flavor/aroma differences to the two-year age gap between these two, but there is also a difference in the barrels used to age them. The 12-year-old was aged entirely in oak barrels that had previously been used to make sherry, while the 10-year-old only spent a portion of its aging in sherry oak barrels; the rest was in bourbon barrels. (Trivia note: It’s redundant to say bourbon oak barrels, since bourbon must, by law, be aged on oak. New oak, at that. Since they can’t be reused for bourbon, the old barrels get sold to other booze artists, including an awful lot of Scotch distillers.)

Anyway, my point is it’s hard to know how much of the flavor/aroma/color difference are attributable to age versus wood differences. I’d love a head-to-head tasting of, say, a 10-year-old and a 12-year-old both aged on the same wood, or a 10 versus 10 (or 12 versus 12), one with just sherry, one with sherry/bourbon.

While those combinations don’t seem to be available (at the moment) from The Macallan, other distilleries have such offerings. I might even have a flight like that in my collection. Will it show up in this Whisky Wind-down? Not even I know at this point.

Today’s thoughts: So, my spur-of-the-moment inspiration for this pairing tonight was looking back at last year’s entry for the same day. I thought it pretty appropriate to follow up that post with a related whisky and a related update.

I still have a day job, though not the same one as last year. And while I’m still not inclined to deviate from my policy of declining to comment on anything work-related here, I’ll simply say I had a good decade at the old job, and I look forward to many good years at the current one. Great places, both of them, with great people.

Today’s toast: To the working stiffs, again and always.

Without going into excessive detail about the particulars, the way the NFL schedule works, you can know, for certain, that a given team will host another team (not in its division) once every six years.

Three years ago, I made a note that my father-in-law’s favorite team, the Detroit Lions, were due to visit the Atlanta Falcons this year.
I planned for it.
I intended to get tickets.
Then the official 2014 schedule was released, and guess which Falcons game the NFL decided to send to London?
Ugh.