Today’s tasting notes: Aroma is sweet and woodsy. Flavor is smooth and slightly sweet, with a warming bite in the finish.

It’s different. I don’t drink a lot of Irish single malts — they’re not terribly common, compared to Scottish single malts — but I enjoy one now and again, especially as they are a departure from standard Irish whisky. This one reminds me a bit of Highland Scottish whisky; probably I’m drawing that comparison from the sherry cask aging used here.

All in all, it’s enjoyable; I’ll probably keep this around for a cold night by the fire. Or, perhaps, I’ll fill a flask for company on a particular walk.

Today’s thoughts: The bottle lore on this one speaks of a graveyard by the River Bush, from which you can sometimes detect the aroma of distilling spirits.

It’s been awhile since I’ve walked a graveyard, but it was an old hobby of mine.

It’s an autumn sort of hobby, the sight of nature in decline serving to accentuate the stark stone reminders that mark our mutual finish line.

Works in winter, too, though. Then the cold breeze bites and the empty trees shiver, and everything says your time will come, too.

Many years I’ve sought such places in these final days of the year, when the festivities fast fade and the year’s last gasp is in the air.

It’s quite the melancholy week — a transitory time fit for reflecting upon the expiring year, all its good, all its ill.

It all starts again soon enough.

Today’s toast: To the dead: beyond the need for a dram, past all ambitions great or small, gone from the wheel. 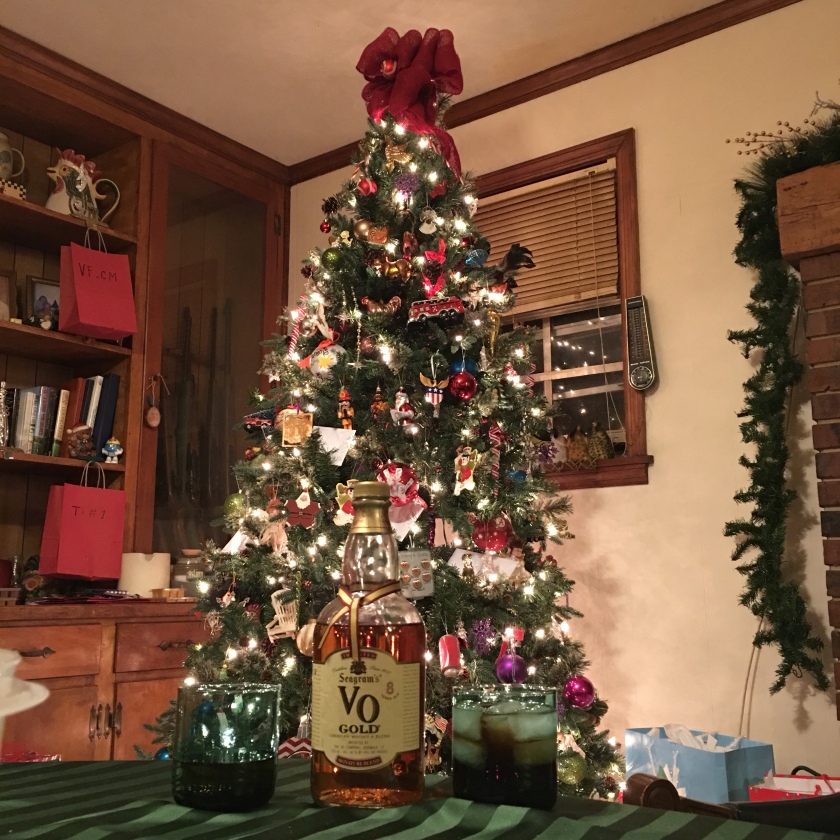 Today’s thoughts: For most of my adult life, whenever I’ve been home for the holidays, we end up at my dad’s home by late afternoon and stay there for dinner and dessert. And once the blizzard of grandchildren and presents has passed, and things quiet down, Dad usually asks if anyone feels like a Christmas drink. For as long as I can remember, for him, that means a couple of ounces of Seagram’s VO Gold, over ice, topped with Coca-Cola.

The older I get, the more I appreciate this ending to a long Christmas day. I’m even getting to like the VO Gold, minus the cola. 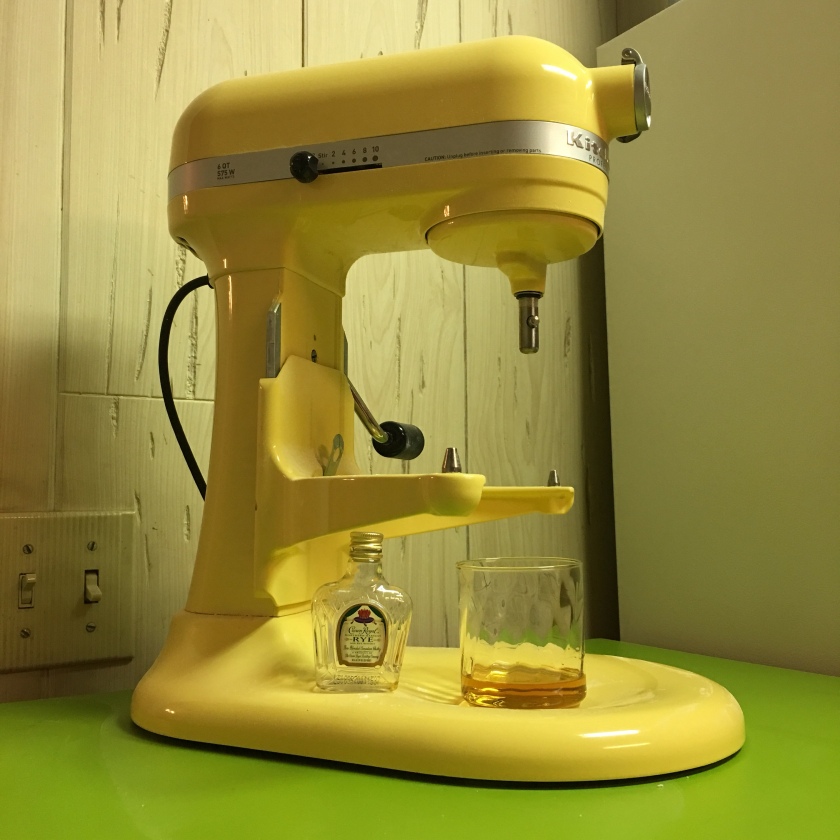 Today’s tasting notes: How do you make traditionally easy-going Canadian whisky bite back? Mix in rye.

This one is 90% rye, though, so maybe it’s actually the Canadian bit that’s smoothing an otherwise harsh rye?

At any rate, it’s a pseudo-sweet, biting-but-smooth dram, just right for a nightcap at the end of a long day.

Between us, we produced two varieties of cupcakes, lemon chiffon pie, lemon syrup, a chicken and pasta dinner, and pizza dough for the traditional lunch tomorrow.

All in all, great day.

Today’s toast: To the holiday hustle; it’s the good kind of tiring.

Today’s toast: To home, there really is no place like it for the holidays, no matter how new or old.

Today’s educational preamble to the tasting notes: Bourbon, as you may recall, is whisky made from at least 51% corn, aged on new charred oak barrels, and … well that’s the essential information.

(It must be made in the States, and there’s some math about distillation alcohol percentages, as well as more math for barreling, bottling, and settling, but I majored in English to avoid a lot of complex numbers, so we’ll stick to the simple but nonetheless important ones.)

Let’s talk about that 51% corn requirement. That’s the minimum, but some distillers use much more in their mash bill.* Corn adds most of the sweetness in bourbon, so most mash bills use quite of bit of corn, plus malted barley, topped with a bit of rye.

A few,** however, diverge and use wheat in place of rye. These bourbons, of which Maker’s Mark is one, tend to have less pronounced spice or “bite” to them.

Apart from the mash bill, the major influence on what comes out of the barrel is how that barrel itself is treated over the years. Say, for example, you took two barrels filled from the same mash bill and aged them both for seven years. One, however, you left in place at the very top of the rickhouse, several stories up in the warmer air, while the other you left at ground level, subject to more cooler temperatures. Seven years later, these would be different bourbons with different flavor profiles.

A lot of distilleries do this, and they sell several different bourbons. The Jim Beam Distillery,*** for instance, produces a couple dozen varieties, aside from the namesake. Barrels from the top floors of their rickhouses might end up blended as Knob Creek; meanwhile, barrels from the ground floor end up as Basil Hayden’s.****

Meanwhile, down the road at Star Hill Farm, the folks who make Maker’s Mark bourbon don’t make two dozen brands. With a few variations, they make only Maker’s Mark. They use one mash bill, and all barrels start their life on the ninth floor of a rickhouse. After a year or so, when the master taster judges them ready, these young barrels are brought down to the eighth floor. And so on and so forth. By the time each barrel rolls out at ground level, it has had a pretty similar journey to its peers.

“Pretty similar” is an important distinction here. Within any particular run, there will be minor variations from barrel-to-barrel, but the overall vibe is such that, when blended, the final product is consistent from year-to-year. However, an especially interesting variation may catch the master distiller’s eye — er, palate — and end up flagged to be sold as part of a small batch variation, or, oh-to-be-the-lucky-one, a single-barrel bottling.

Oh, right. Bottling strength. For the most part, after blending the various barrels, the batch will be diluted to bourbon’s traditional 90 proof (or, perhaps, a slightly higher or lower proof to which a particular bourbon is made).

Now and then, the distillers will decide to honor us with a little something special, and they’ll sell a batch at cask strength, undiluted as it came off the wood: strong, pure, bourbon as nature intended.

Today I’m drinking one of those.

Today’s tasting notes: The aroma on this one is something else. It’s, as you might expect, a stronger version of the regular Maker’s Mark aroma — rich, sweet, inviting — and you start noticing it before even bringing the glass up to sip. It’s big, bold, beautiful, and, despite the high proof, there is little discernible alcohol burn on it. Even if you stick your nose right down and inhale deeply, it’s just a big, sweet, friendly aroma. Oh, I love it.

The flavor is an intense version of the regular stuff — warm, on the sweet side, and barely any burn, even at 110.4 proof.

Today’s thoughts: I owe this bottle to attention to detail.

Over the years, my family has gradually become accustomed to my “hobby” of whisky tasting (and the associated writings that arise therefrom).

During last year’s Christmas shopping season, while he happened to be out at a nearby military base exchange store, my dad saw this. The words “cask strength” clicked in his mind in association with words I’d written, so he bought it and gifted it to me.

I’ve been hanging onto it for a year now, waiting to include it in this year’s Whisky Wind-down. Sure, I could have opened it earlier, with the intention to save some for now, but … open bottles of bourbon have a tendency to disappear around The Empress of Whisky.

I’m not saying she would steal from her most loyal subject, but there is a troubling “evaporation rate” in her presence. Must be a body chemistry thing.

Aside from adding us to its Christmas card list, the distillery put our names on a barrel of bourbon that is currently winding its way down the racks in a rickhouse at Star Hill Farm. When it finishes, we’ll get a call to attend a bottling ceremony and the chance to purchase a unique bottle from that single barrel. Cool, eh?

* — “Mash bill” is distiller-talk for “recipe.” It’s expressed as percentages (by weight) of each type of grain that goes into the brew kettle. And, while you’re here, “rackhouse” is just a bastardized spelling/pronunciation of “rickhouse,” which is just what Kentuckyians call a warehouse full of racks for storing bourbon.

** — Okay, more than a few, if you want to get into some of the newer permutations of bourbon. Since the only legal requirement is the 51% corn, you could go nuts and use any other grain for the rest. But your established bourbon-makers are content to focus on variations of the classic corn/barley/rye or corn/barley/wheat blends. Subtle changes in those ratios can make a big difference, before you even get to variations in wood char, aging times, aging conditions. Put simply, master bourbon makers don’t need to play with weird grains to set themselves apart.

*** — The distillery itself, as distinct from its parent company, Beam Suntory, which is the owner of many other brands including — surprise! — Maker’s Mark. I can’t say I’m a fan of corporate conglomerates in a general sense, but in the specific case of Beam Suntory, I have to give the company credit for allowing its disparate holdings to operate in whatever fashion has proved historically viable to their success, with little interference from the top.

**** — Disclaimer: These are brands owned by Beam Suntory and made at Jim Beam Distillery. The floor levels I describe are, however, just made-up examples. Knob Creek might actually be a mid-floor bourbon, while Basil Hayden’s is top. The process is otherwise as described.