By far the most popular series I’ve written here is Whisky Wind-down.

The original, set in 2016, was my way of combining my love for whisky, my disdain for the events of 2016, and my fascination with advent calendars.

The result? 31 days of drinking, talking about random things, and really enjoying my own words again.

Through 2017, my writing tapered off again, but I got fired up at the end of the year, and I once again laid down a month’s worth of (almost completely consecutive) posts, even though I spent the last few days of that year traveling around Costa Rica.

Then the silence. I still haven’t explained that (and am perhaps inclined not to?) but for the next twenty months the newest post on the site remained 2017 Whisky Wind-down, 1: Life’s a Beach.

For all you knew, I had died on that beach. Or decided to live on it.

I spent the next year not writing here, and when December 2018 rolled around, a few people — I have fans! Tens of them! — wrote to me when Whisky Wind-down didn’t start that year. I told them (truthfully) things had been difficult but I still planned (honestly, I planned) to write a reduced 2018 Whisky Wind-down. At first I thought it would just have a late start. Then a late start became “maybe a top 10 list,” which became “maybe just one good, long post to wrap the year,” which became 10 months not writing anything at all here.

Well, I’m writing here again. And whether I ever get around to properly explaining the time I wasn’t writing here, I am, right now, enjoying myself again.

And I still drink whisky.

It’s my pleasure, therefore, to tell you to expect, in the coming days, Whisky Wind-down The Third: The Saga Continues, Following A Hiatus That Will Likely Not Be Elaborated Upon During This Series, Though You May Read With Eagerness Just In Case I Change My Mind, Or, Just, You Know, Read It Because You Like Reading Whisky Ruminations. 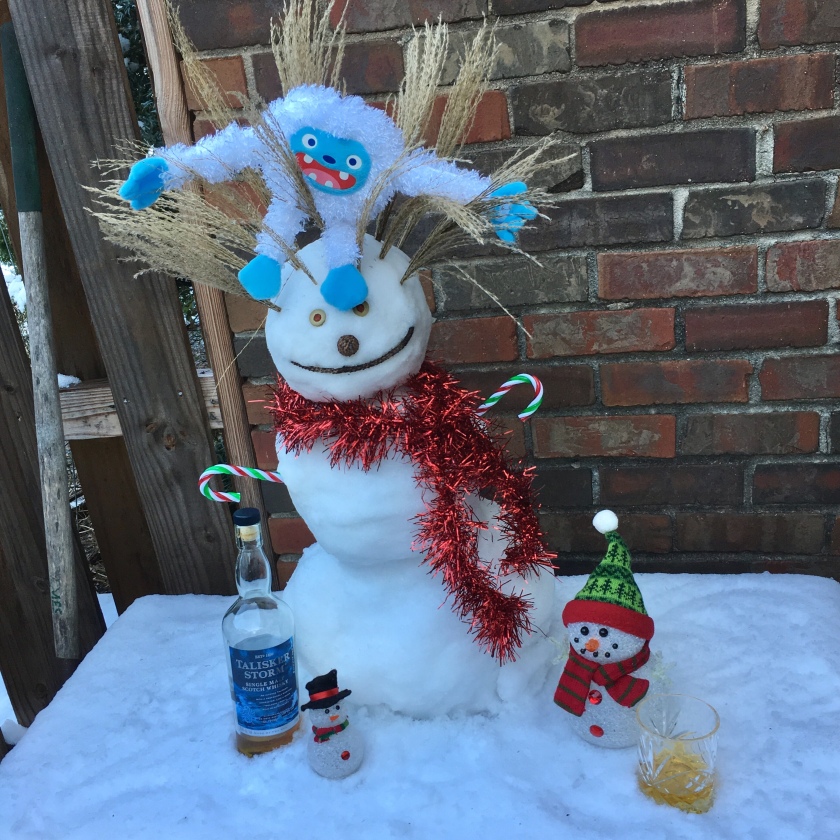 Today’s tasting notes: It’s all peat and brine, and I rather enjoy it.

Today’s thoughts: My first experience with Talisker was The Distillers Edition, a bottle of which I opened the day I received news of a friend’s death, and thereafter it became a whisky I went for in melancholy times.

When I received this bottle of Storm, I therefore made a point of waiting to open it on a happier occasion. Said occasion was playing board games with a whisky-loving friend.

Today’s short entry excuse: It’s a post-snow day, and I spent it lazing about before taking in an annual party with friends. Good friends. The sort you go out on a post-snow day for.

Today’s toast: To good company. May you have it and be it.

In the very near future my writing will have a tendency to focus on drinking and reminiscing.

Before that starts, I’d like to revisit a piece wherein I did both of those things, albeit for rather different reasons. I’ve mentioned before — and it would likely be obvious to you, anyway — that I sometimes have trouble making the words flow. There are a number of times when I want to be here, saying something, and I can’t make it happen.

Then, sometimes, all it takes is a beer in a bar on my grandmother’s birthday.

I think about that evening a lot, actually. Whenever the words won’t come, which is all too often. My maternal grandmother never really knew me as a writer, but I still think of disappointing her when I’m not living up to my own expectations.

Anyway, here’s one occasion when I did, if only briefly:

Notes: The font is funny on that page. That’s because I composed and posted the entire entry at the bar, using my phone. It bugs me, but not enough to change it, because seeing it reminds me that much more of the act of writing itself, which, well, not to belabor the point entirely, was much more important to me that evening than the actual words themselves.

(Also, I forgot the photo.)

The city of Atlanta believes in only holding parades on Saturdays — and with our traffic, who can blame them? — and pubs are always eager to get an early start on any holiday, so we’ve been honoring our heritage more or less continually since that morning.

An Englishman, an American, and an Irishman are out drinking.

One lands in each man’s glass.

The Englishman sniffs, pushes his drink away.

The American shrugs, removes the fly, and continues drinking.

The Irishman removes the fly and screams, “Spit it out, ya bastard!”

I regret never having told that joke to my grandmother, daughter of Irish immigrants, source of my Irish blood. I imagine she would have liked it. Anyway, I’ll raise a glass to her tonight, and I’ll try my best to identify with the Irishman.