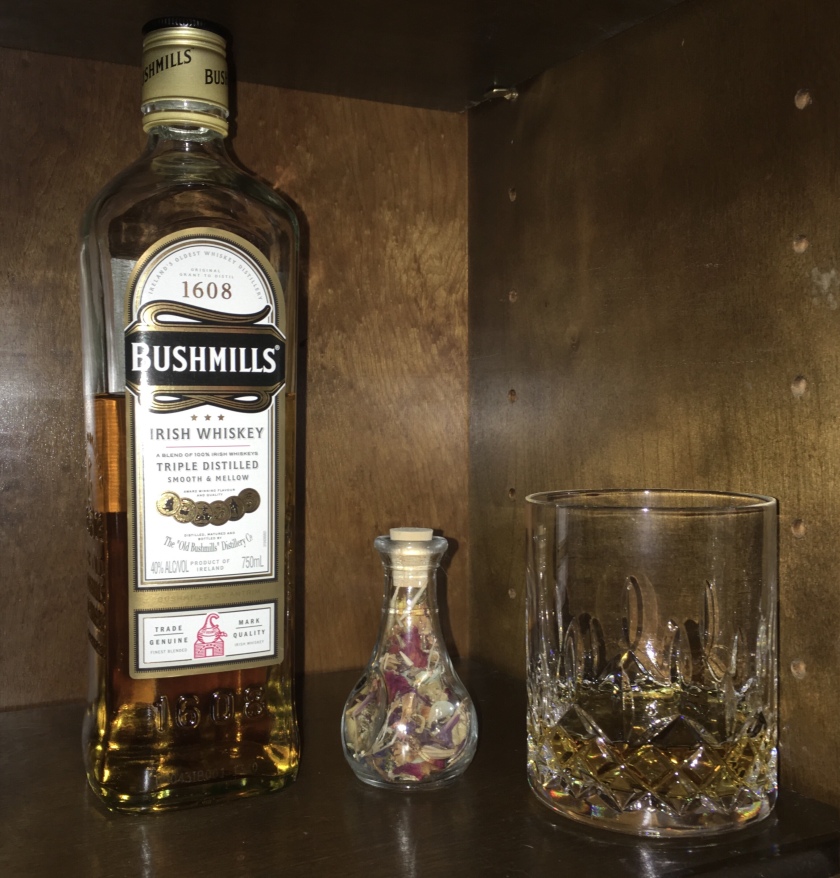 Today’s tasting notes: If you open a distillery in 1608, and it’s still making whisky over 400 years later, you’re doing something right.

I’m not going to go into a long and winding explanation of the making of Irish whisky (tonight) but I’ll just say if you want a classic example it is impossible to do better than Bushmills Original.

It’s so smooth and easy to drink that I rarely touch the stuff, having developed a fondness for rough-edged, heavy-flavored whiskies full of peat, smoke, brine, and etc.

Every now and again, when I’m feeling in the mood for something light, I’ll pour a measure or three of this stuff and then have to remind myself to sip it slowly because while it may be easy to drink, it is still 80-proof potent.

For the most part, I don’t abide cocktails or other mixed alcoholic beverages, but I am fond of a little tipple in my coffee now and again. Irish coffee is a well-known classic for a reason, and you can’t go much better than a robust brew into which is stirred sugar (brown, if you’re feeling feisty), heavy cream, and a healthy slug of Bushmills.

Today’s thoughts: I’m a quarter Irish by way of my paternal grandmother, whose Irish immigrant forebears left the Emerald Isle for the land of opportunity, specifically Texas. If that weren’t weird enough, she took a liking to a Georgia boy, whose family had been living south of Macon for longer that there was a Macon to live south of, and followed him home.

I hate to admit that I don’t know whether the woman liked whisky. I don’t think so. At least I can’t recall her keeping any in her house, but then my memories of her house are mostly kid memories of big family gatherings: my immediate family plus my dad’s three sisters and their spouses, a gaggle of cousins, usually a random relative or five … and somewhere, sitting quietly, watching the proceedings, Big Mama.

I do know she liked coffee. Strong coffee. No, stronger than that. No, keep pouring grounds. There you go. Now use half a pot of water. Good boy.

She never, to my knowledge, made Irish coffee. Hell, she probably would have complained the whisky was diluting it.

Seriously, you are not imagining this coffee as strong as she made it.

And she drank it right up until the day died, still living in the little house she and my grandfather had bought together more than half a century earlier, where she’d finished raising their four kids after he died an early death, where those kids had brought their kids and then some of those kids brought their own, where she was surrounded by those she loved.

Today’s other thing: Pecan pie. I wish I’d learned to like it while she was still alive to bake it. Legendary.

Today’s toast: May the sun shine upon your face (unless you prefer the indoors), may the rains fall soft upon your fields (unless it’s harvest), and until we meet again …

Note: There may or may not be some errors in this or any post, but the inconsistencies in spelling whisky/whiskey are not by accident. Usually. I prefer “whisky,” but some folks (including the Irish) use “whiskey.” I try not to make a big deal out of it, but it comes up, over and over, and is especially noticeable on days like today, when a featured bottle uses one spelling while I’m used to writing the other. For more about this (and other whisky terminology) read this post I wrote last year.