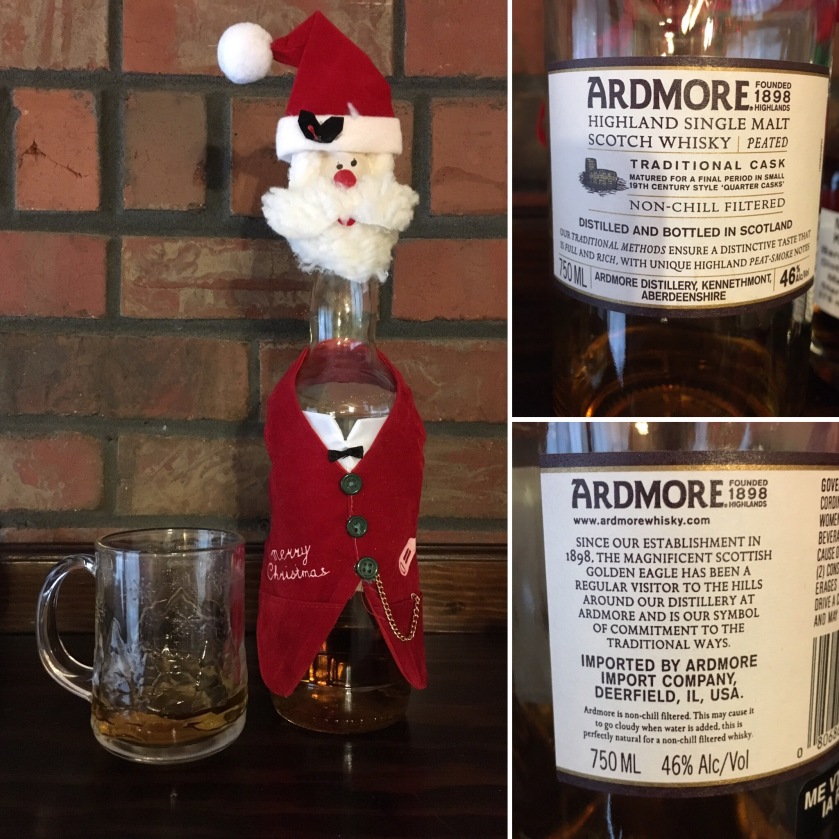 Today’s tasting notes: Full, rich, warm Highland single malt with a pleasant earthy aroma and plenty of peat on the way down.

I’ve had this bottle kicking around for a bit, but I just went looking for more information on it and learned a couple of things: 1) It won a gold medal in the Highland Single Malt — No Age Statement category at the 2010 World Whiskies Awards. 2) It is no longer being made, having been supplanted by a different line from Ardmore.

Since this whisky lacks an age statement, let’s talk about what that means. (For your sanity and mine, we’ll stick to Scotch whisky, since age statements mean different things to different types of whisky.)

Say you are a distiller with some whisky you have been aging for 12 years, but you aren’t happy with it as-is and feel it needs a bit of mellowing to be just right. You don’t want to wait another year (or two or three), so you decide to mix in a bit from an older batch to get the flavor profile you seek.

First, so long as you’re using another whisky made at the same distillery with the same ingredients and methods, you can still call it single malt. So long as it’s all malted barely distilled at the same location, it qualifies, even if you end up blending different batches of different ages. (The term blended Scotch whisky refers to one that is made from multiple malt whiskies made at different locations OR one that contains grain whisky in addition to malt whisky. Or both. If that sounds confusing, well, yell at the next member of the Scotch Whisky Association you meet.)

So, you think that 12-year-old whisky needs a bit of older whisky mixed in to mellow it out. Even if you add some of your precious 25-year-old to the mix, you still have to call it 12-year-old on the age statement, which legally must be no older than the youngest whisky included. (So, even if you went barking mad and produced a mix that was 99% whisky aged 25 years, with the remaining 1% aged only 12, legally you would have to sell it as a 12-year-old whisky. Right after you got your head examined, I suppose.)

So, what’s the big deal with No Age Statement whisky?

Generally, such whisky is marketed as an artful creation of master tasters, rather than an expedient answer to demand in a booming market.

It’s either that or sell less whisky.

It’s not like there’s a way to speed up the aging process … wait a minute … there is, sort of.

The advantage of this method — aside from being able to use nifty marketing spiel about “19th century methods” — is that the whisky spends more time in contact with the wood, owing to the greater circumference-to-volume ratio. Or something. Pi may be involved.

Also, being able to say you used “traditional methods,” hearkening to the days when casks had to be lighter to fit on the backs of the donkeys who would carry them through the Highlands, well … it helps people get over their snootiness about your lack of an age statement.

Rounding back to the beginning, the whisky in my glass today was produced in quarter casks, and it has no age statement.

Some people have a philosophical beef with both those factors. For them, Scotch whisky that does not display an age statement, but does use marketing as cover for a distillery’s changing methods, is to be looked down upon.

Me? I can’t say I’m indifferent to these factors, but I care more that you’re serving a good whisky for the price you’re asking.

This fits the bill. It’s a full, flavorful peaty whisky that compares well to many 10- or 12-year-old Highland single malts I’ve had the pleasure of sampling.

Today’s thoughts: The distillers who laid down their whiskies a quarter-century ago might well have thought they were making enough, or more than enough, to meet the future’s demand. Long-term gambles like that are very difficult to get right.

It’s almost as difficult, say, as having children and then wondering what your life will be like a few decades hence when they bring home their spouses for the holidays.

I like to think my in-laws are at least tolerant of their poet-in-law. I’ll ask them again in a day or so.

Today’s observation on holiday decor: If you think a whisky bottle dressed as Santa is weird, you should see my mistletoe-bedecked bourbon.

Today’s toast: To families coming together for the holidays: May your homes be as warm and inviting as a good Highland single malt, however old.