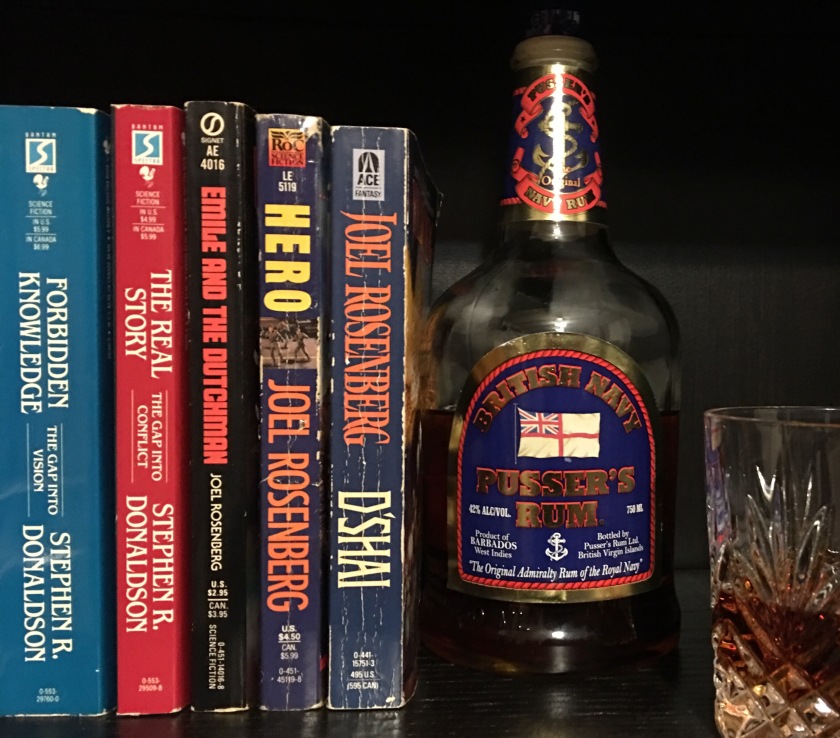 Today’s tasting notes: This is not whisky. Cry foul if you want, but I’ll defend the inclusion here. As far as process goes, this shares much with whisky, from small batch wooden stills to aging three years minimum on charred oak. The key deviation that makes this rum, not whisky, is the mash: sugar cane.

The taste profile isn’t like your typical rum at all. It drinks more like a sweet bourbon, say a wheated version with a corn-heavy mash.

It’s sweet, but not cloying. It has rough edges, but not serious bite. I could sip this all day.

Point of fact, I have.

Honestly, though, I love this stuff as much for its history as its flavor. From the mid-1600s through July 31, 1970, the British Navy issued a daily rum ration (a “tot” of rum) to its sailors. This was all very regulated and full of pomp and tradition, down to the exact rum to be used.

This stuff? It’s made to the British Admiralty’s specifications.

For the duration of the rum ration, that recipe was not shared. The rum was never made available to the public until Pusser’s Rum Ltd. purchased the rights to make and sell the blend (and use British Navy iconography). About a decade after the rum ration went away (they called it Black Tot Day) the rum became available to the public for the first time, with a portion of proceeds benefiting the Royal Navy Sailors’ Fund.

Today’s thoughts: A friend of mine is currently serving as an officer in the U.S. Marine Corps.

It may be somewhat odd that an ancient British Navy rum recipe makes me think of an American Marine, but, well, that’s how my mind works sometimes.

Though I have not seen him since his appointment some 16 years ago, we have kept in touch, sporadically, over that time. Our lives are pretty different, but we are bound by a deep friendship started long ago.

Last time I saw him, we drank cognac and I wished him well on his journey. Next time, maybe we’ll have a tumbler of Pusser’s Rum. The 15-year-old, if I can lay hands on it.

Today’s thoughts on toasts and traditions: I like toasts. I don’t like starting a round of drinking without at least a polite “cheers.” Maybe it’s my Irish heritage (or the relatives who drilled that into me, anyway). Whatever, you may rely upon me at your wedding.

The tradition-minded British Navy has lots of toasts. Aside from the daily loyalty toast (“The Queen!”) and others for special occasions, there is one for each day of the week:

Monday: Our ships at sea
Tuesday: Our sailors
Wednesday: Ourselves
Thursday: A bloody war or a sickly season
Friday: A willing foe and sea room
Saturday: Our families
Sunday: Absent friends

Today’s toast: To my friend the Marine, away across the sea: Be well until we drink together again.